Sometimes you just want to hide retweets of people you follow — you came on Twitter to read these people’s own thoughts and the notes about their lives, but you definitely don’t want to put their own “favorites” (which RT’s basically are) in your own feed.

That’s okay: you shouldn’t be intimidated by the thought that you’d prefer to hide Twitter retweets from user or even a list of users. And fortunately, you don’t need to look for a special addon or widget on Hootsuite for that, you don’t even need a Chrome extension! Twitter has already created a single button for that.

You might want to remove all the replies and all the retweets in general, but we don’t recommend doing that. If you are developing your account, we strongly recommend that you establish as many connections with your audience as possible — as often as possible.

Retweets and replies from other people can also help you, even if at first it seems that this is not the case. Alsopeople RT those people and those things that are close to them.

If you look through the RT’s and replies of your audience, you may well be able to find people to whom it would be nice for you to subscribe — of course, for the sake of mutual subscription.

Even if it doesn’t seem like it will work, just try it. Sometimes half an hour of mutual subscribing per day can make a very big difference after a certain amount of time has passed.

So, if you don’t want to see someone’s retweets in your timeline, this problem is easy to solve from your mobile app. Just go to this person’s page and click on the settings button — there you will be given several options, first of them being “turn off retweets”.

Push on it to remove all the RT’s that this person is going to make from your feed. Easy as that, plus, you can actually remove the RT’s from several people; but sadly enough there is no such button that would give you a chance to remove all the retweets from all the people — we can hope for it to appear in the future though. 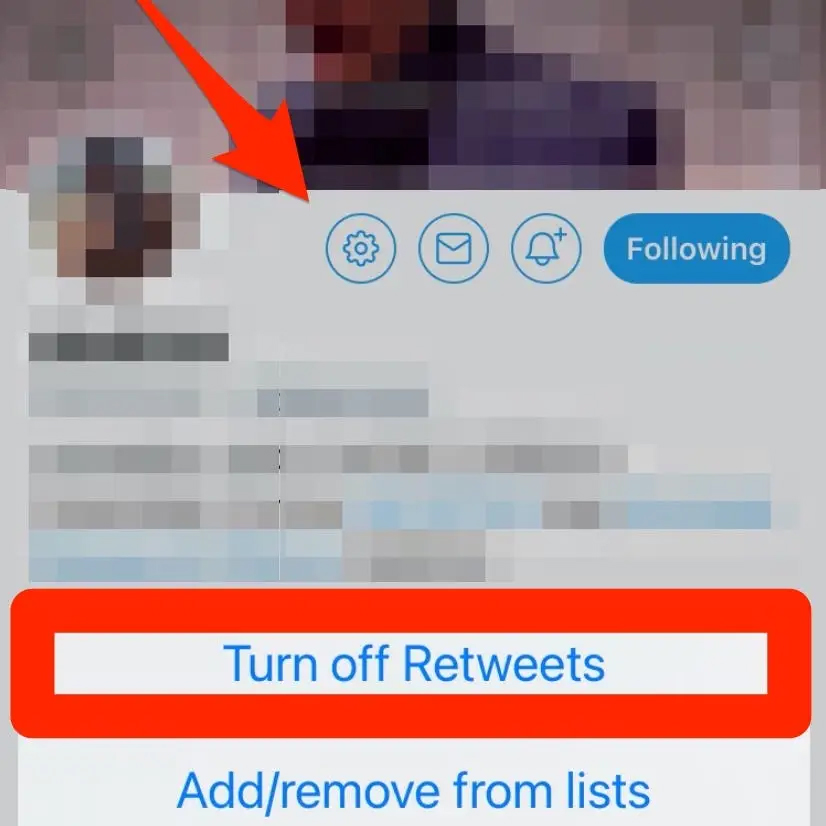 Twitter helps with filtering information, that’s for sure, but it doesn’t give much help with promoting an account when you need it. How can you ease your way?

Well, you can buy Twitter retweets, because as soon as other people start seeing what you’re posting in their own feed due to their friends and fellows, you’re getting a way bigger chance of gathering more followers and selling them your products and services if this is what you came here to do.

However, you need to make sure that you’re purchasing quality services, otherwise you’re going to get bot RT’s that don’t bring any practical value to your page’s development process.

Do not forget that the main component of success still lies not in paid services, but in constant communication with your audience and regular posting. Also, it will not hurt you to understand what your potential audience and the existing one expect from you — for this you can either independently analyze competitors, or hire a professional.

Yes, you can do that for one or several people. To do so, go to their page and push the settings button — the first option you’re going to see will be “turn off retweets”. After that, all the RT’s that this person is going to make will be hidden from your timeline.